A BRIEF HISTORY OF VENICE

While most visitors only see the dazzling surface of this magical city, we grew up here. Navigating her waters and back alleys. The hauntingly beautiful places tourists never go.

We inherited our city from our mainland ancestors who settled on these marshlands to escape Attila and his uninvited Huns, as the Roman Empire fell in 400AD. Surrounded and protected by water. And isolated as well.

The offshore bubble that officially became Venice in 421AD allowed the city to create her own utopian paradise and ecosystem, unencumbered by the political turmoil of medieval Europe around them. For the next 8 centuries, she traded her wealth of fish and salt for necessities and curiosities they did not have, until the Venetian Republic became the crossroads of trade between the East and West, and the wealthiest and most powerful mercantile empire in the known world. Which in turn spawned gilded palaces, art, furniture and architectural treasures beyond the world’s wildest imagination.

By the middle of the 13th Century, the international epicenter of trade, style and extraordinary artistic achievement had shifted – to the city of Venice, Queen of the Sea.

THE BIRTH OF THE VENETIAN PAINTED ARTS.

In the late 1200s, a young Marco Polo returned to Venice from his first trade expedition to the Far East with samples of a style of furniture that dazzled the city’s style-makers, and subsequently became the most popular furniture art form in all of Europe. Chinoiserie. Ornate Chinese chests, chairs and armoires whose intricate shapes and hand-painted decorations were exquisitely sealed with dozens of coats of polished lacquer. Made exclusively from the wings of Chinese beetles.

The furniture makers of Italy’s Venezia and Friuli regions were so enthralled with Chinoiserie that they spent the next 400 years perfecting their own Italian version – with raised gesso decorative finishes made of plaster and rabbit skin glue. 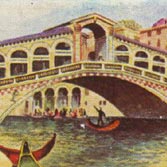 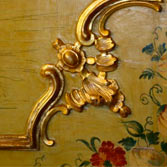 Do NOT follow this link or you will be banned from the site!
We use cookies to ensure that we give you the best experience on our website. If you continue to use this site we will assume that you are happy with it.Ok